Arrival at the International airport Zvartnots.

Meeting at the airport with Happy Holidays name plate and transfer to the hotel.

Free time for the tourists.

A sightseeing tour about Yerevan - one of the most ancient cities in the world, founded three thousand years ago in the heart of  Ararat valley. 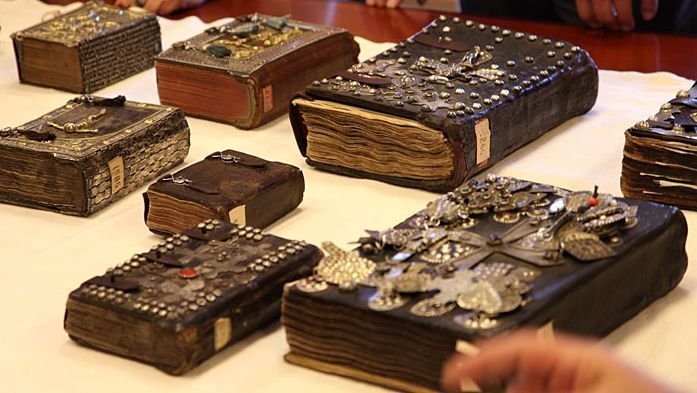 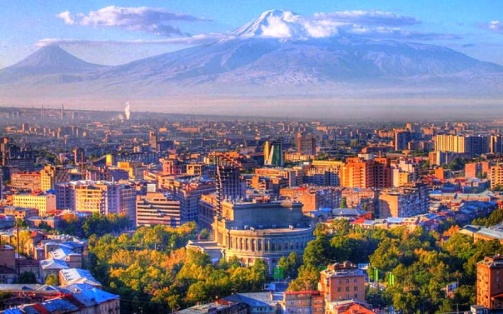 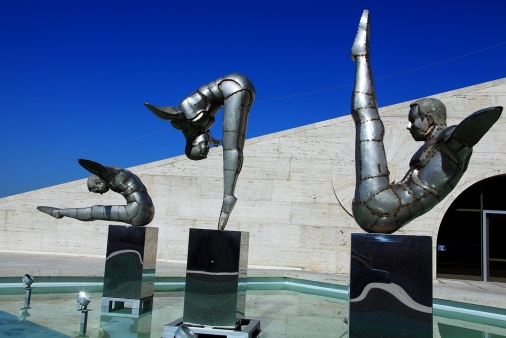 Matenadaran is a repository of ancient manuscripts, research institute and museum in Yerevan. It holds one of the world’s richest depositories of medieval manuscript and books which span a broad range of subjects, including history, philosophy, medicine, literature, art history and cosmography in Armenian and many other languages. 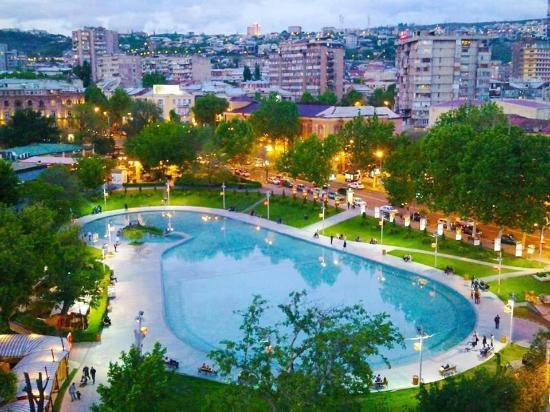 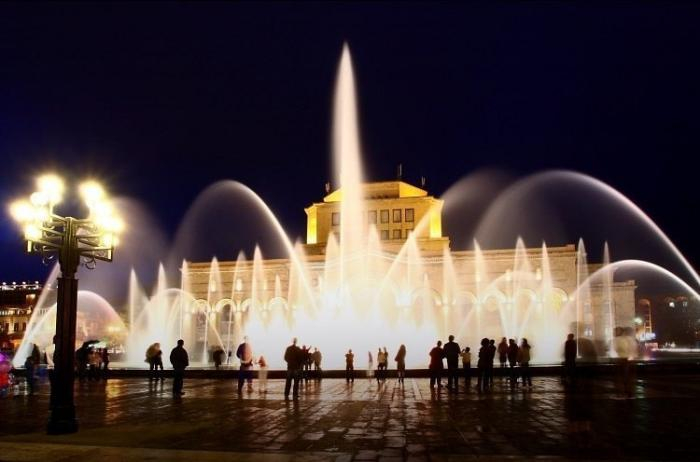 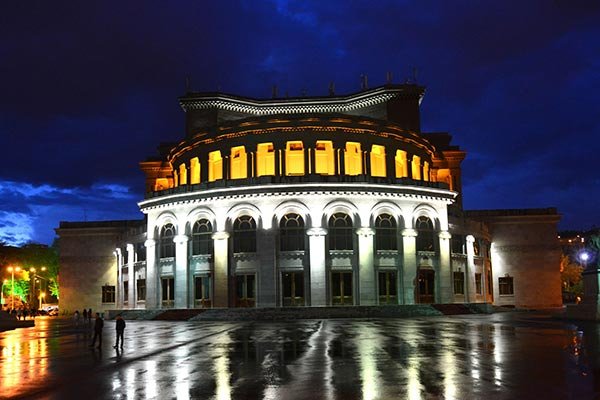 A trip to the center of Christianity of Armenia, to the city of Etchmiadzin. During the tour we will get acquainted with the history of adoption of Christianity and visit the majestic church of St. Hripsime (VII century AD).

Etchmiatzin Cathedral is the mother church of the Armenian Apostolic Church located in the city of Vagharshapat (Etchmiatsin). This cathedral was built in ancient Armenian and is considered the oldest cathedral in the world. The original church was built in the early fourth century between 301 and 303 according to tradition by Armenian’s patron saint Gregory the Illuminator, following the adoption of Christianity as a state religion by King Tiridates III. It replaced a preexisting temple, symbolizing the conversion from paganism to Christianity.

The Treasury-Museum, complete with its majestic staircases made of marble imported from Italy and massive exhibition halls, houses more than 3,000 religious artifacts that trace the history of Armenian Christendom through the ages in Armenia and around the world. 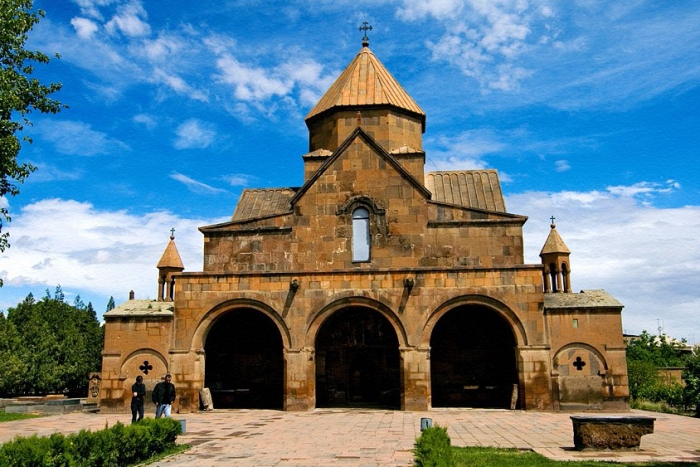 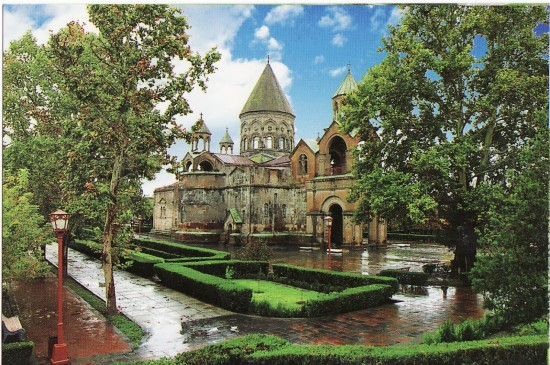 The Temple of Garni. It is the best-known structure and symbol of pre-Christian Armenia. It is the only standing Greco-Roman colonnaded building in Armenia.neopaganism. Near the temple there are ruins of an ancient fortress, royal chambers and also baths built in the 3rd century AD. From here you can see a picturesque view of the Azat River and Garni Gorge.

The monastery complex Geghard or Gegardavank is a two-story temple carved in stone and the adjoining church. The name commonly used for the monastery today, Geghard, or more fully Geghardavank , meaning "the Monastery of the Spear", originates from the spear which had wounded Jesus at the Crucifixion, allegedly brought to Armenia by Apostle Jude, called here Thaddeus, and stored amongst many other relics. Now it is displayed in the Echmiadzin treasury.Now it is displayed in the Echmiadzin treasury. Gueghard is listed as a UNESCO World Heritage Site.

Tsaghkadzor ski resort is located just above the town, at a height of 1750 meters above sea level. It was fully modernized during the 1st decade of the 21st century. All of the cableway lifts are manufactured and operated by the Leitner Group. The skiing season in Tsaghkadzor normally starts in mid December and stretches well into March with the top slopes often fit for skiing in April.

Tsaghkadzor is the second Armenian city after Yerevan to have the largest number of hotels. Many luxury hotels and resorts were opened recently to serve the town during the summer and winter seasons. 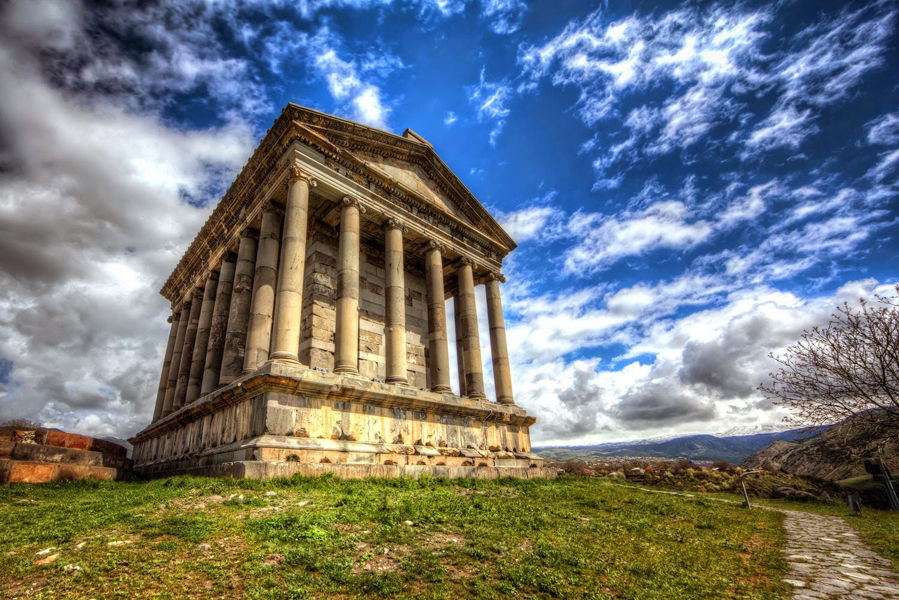 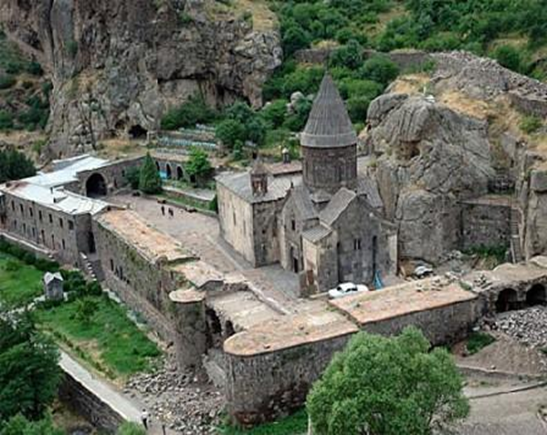 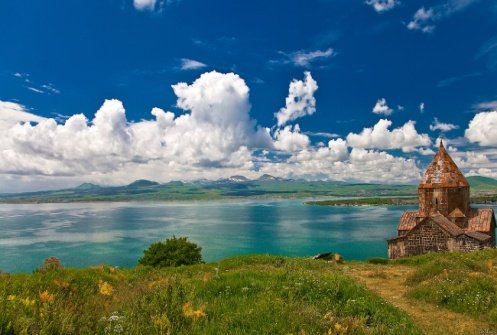 Afterwards we will go to the pearl of Armenia Lake Sevan.

The lake as if merges with the sky, since it is located in a mountain bowl at an altitude of almost two kilometers above sea level. According to legend, the pure water of this lake in ancient times could drink only the gods and stars. Today, Sevan and its environs are a well-known landmark of Armenia, which is worth seeing to all the admirers of the Caucasus and its beauties.

Survey of the IX century monastery of Sevanavank, located on the peninsula of Sevan with the same name.

One of the most ancient sights of the Lori, the medieval monastic complex, Haghpat, was built in the 10-th – 13-th centuries. Haghpat monastery was the largest centre of science with rich collection of manuscripts. It had the premises for the library manuscripts copying, refectories and universities.

Monasteries of Hghpat and Sanahin. These two Byzantine monasteries in the Tumanian region from the period of prosperity during the Kiurikian dynasty (10th to 13th century) were important centres of learning. Sanahin was renown for its school of illuminators and calligraphers. The two monastic complexes represent the highest flowering of Armenian religious architecture, whose unique style developed from a blending of elements of Byzantine ecclesiastical architecture and the traditional vernacular architecture of the Caucasian region.

The monasteries of Haghpat and Sanahin are protected by UNESCO and included in the List of World Heritage Sites. 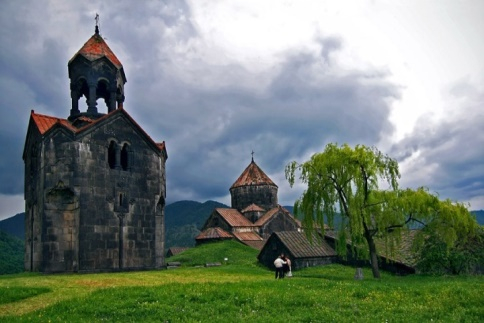 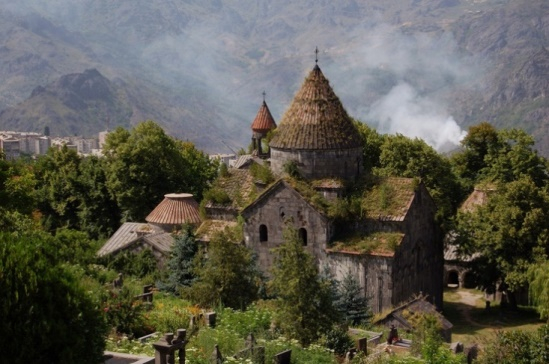 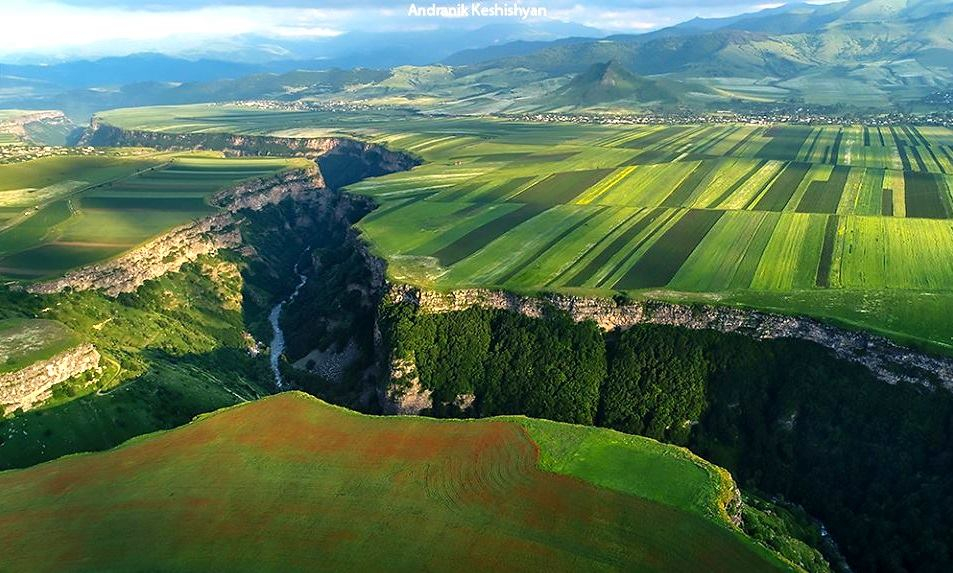 Crossing the border and overnight in a hotel in Tbilisi.

The name Tbilisi originated from the Georgian word tbili which means warm. Legend connected with the city's beginning says that famed 5th century Georgian tsar Vakhtang Gorgasali was hunting near Mtatsminda in the present day neighborhood of Sololaki when he saw a pheasant. He sent his falcon to retrieve it, but both birds disappeared. When the birds were found boiled in a hot spring. Vakhtang ordered that a city be built on the site of the west bank of the Mtkvari River.

Today the image of the city harmoniously combines antiquity and modern features: next to the temples of the VI-VII centuries. modern high-rise buildings have grown, wide streets, parks, gardens, squares have appeared, majestic bridges spread through the fast and full-flowing Kura. 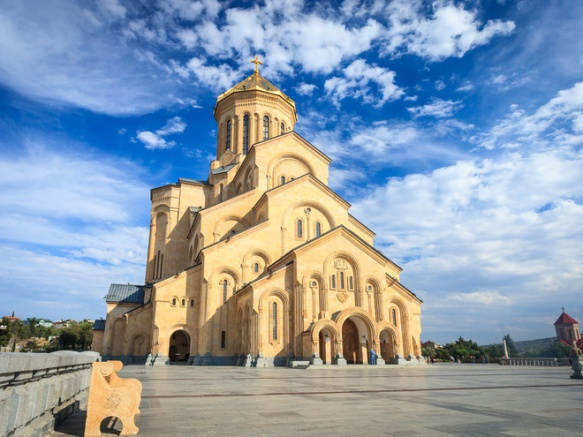 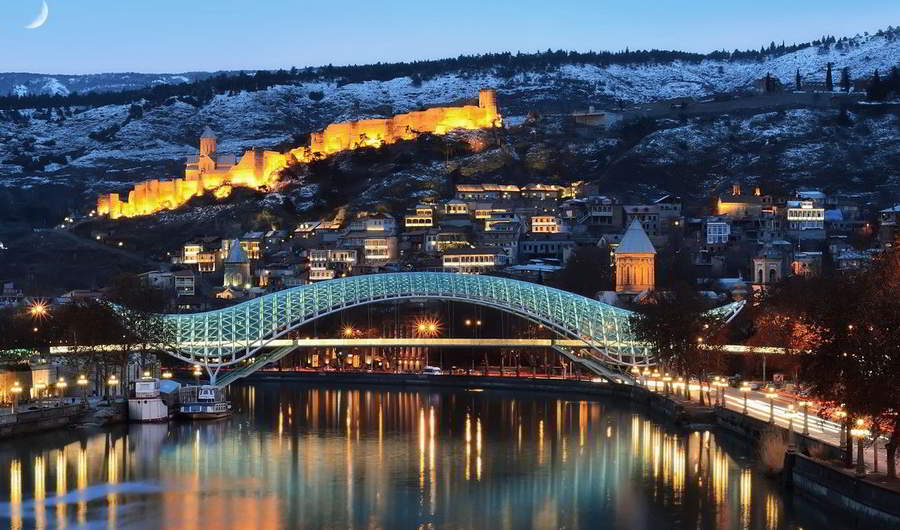 We will begin our excursion from Freedom Square (central square of Tbilisi). Let's look at the quarter of the Georgian medieval nobility, the Anchiskhati basilica (VI century). Let's pass right-bank part of the Old Town, from there you can clearly see a huge rock mass, steep and precipitously falling to the river Kura. It is effectively crowned by Metekhi Cathedral, built in the second half of the 13th century.

We will climb to the Narikala fortress by the cable car. From the fortress wall are amazing views. A wonderful place for memorable photos. After visiting the sulfur baths in the amazing place Abanotubani.

Considered as the cult and sacred place for each Georgian, Mtskheta, the ancient capital of Georgia is located 20 km from Tbilisi. Nowhere in Georgia is there such a quantity of sacred and cult places as in Mtskheta. This is the reason why this ancient city is also named “the Second Jerusalem”. It is there that St. Nino of Kappadokia brought the good message to. It is there that one of the greatest relics of the Christian world, the God's Tunic, is kept. It is there that streams of Christian pilgrims and tourists from all over the world flow to. The main attractions there are: one of the most ancient and esteemed temples – Svetitskhoveli Cathedral and ancient Dzhvari Monastery. They both are unique amazing samples of religious architecture of the medieval Caucasus.

The Orthodox Monastery of Jvari stems from the 6th century near Mtskheta in the Mtskheta-Mtianeti region, Eastern Georgia. The name is translated as the Monastery of the Cross. 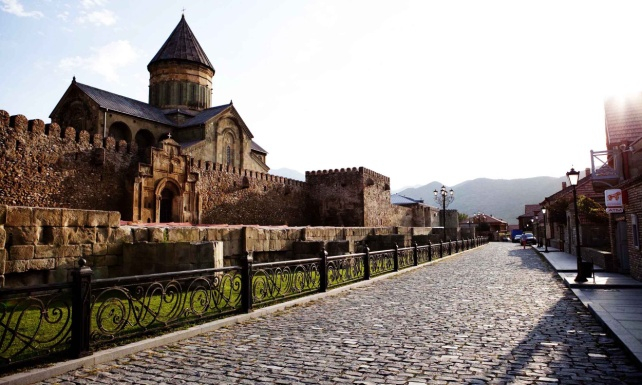 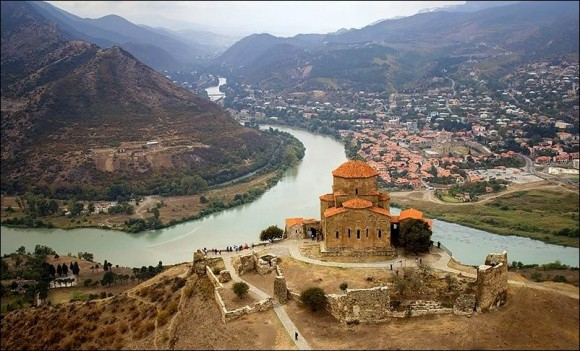 Dilijan  is a spa town in the Tavush Province of Armenia. Usually called Armenian Switzerland or Little Switzerland by the locals, it is one of the most important resorts of Armenia, situated within the Dilijan National Park. The forested and reclusive town is home to numerous Armenian artists, composers, and filmmakers and features some traditional Armenian architecture. The Sharambeyan street in the center, has been preserved and maintained as an "old town", complete with craftsman's workshops, a gallery and a museum. Hiking, mountain biking, and picnicking are popular recreational activities.

Visit to the monastery Haghartsin - XI-XIII century. It is the pearl of the canyon, one of the most mysterious places in Armenia, drowning in the greenery of mountain forests. Haghartsin monastery is nestled in a temperate rainforest on a mountainside. It is one of those spots in Armenia that feels like you are walking through a huge, unreal movie set. 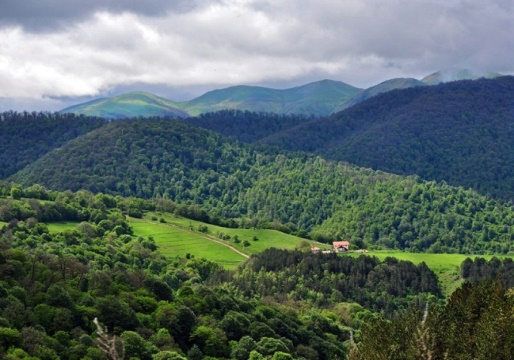 Overnight at the hotel in Yerevan.

Flight
Lunches and dinners ($ 36 per person per day without alcohol)